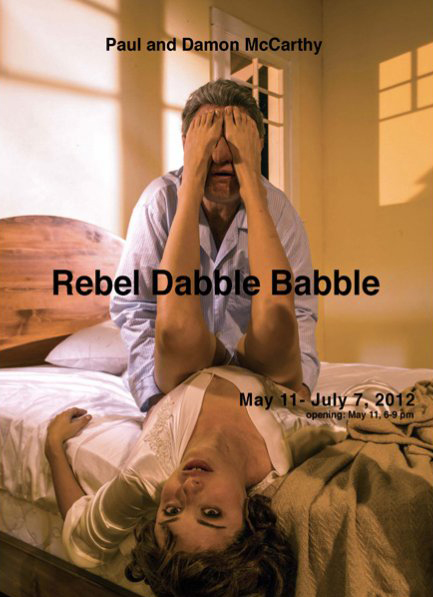 I’m on Traction in downtown L.A. last month and I hear the sounds of domestic violence coming through the walls of a warehouse. Somebody’s yelling, getting slapped, cutlery is being broken. This is in the Arts District, where Los Angeles drops its ambivalence about being a city and develops some street culture. There’s a sign beside the door where the guttural cries seem to be coming from: The Box Gallery. Entering the building turns out to be the cultural equivalent of changing the bandage on a stranger’s hideous and possibly terminal infection, and yet, with my dying breath I would defend the artistic quality of the work that was on exhibit there.

What you would have seen (the exhibit closed in July) when your eyes adjusted to the interior light would have depended on where the floor-to-ceiling video loops happened to be. It might well have been footage of a middle aged man in a gray suit and a prosthetic, Jim Backus nose facing off across a dining room table from a woman in a pink 1950s sweater, and a Ann Duran wig, and with food smeared all over her cheeks. Cursing at the man she takes a swing – whack! – nailing him across the face. Whack! – he hits her back. And then yelling at each other, nose to nose, they really start going at it. Or it might have been footage of the actor James Franco cuddling on a bed with the porn star Elyse Poppers, kissing and making vapid small talk. Franco is costumed to accent his resemblance to James Dean in the 1956 film Rebel Without a Causedirected by Nicholas Ray, and Poppers here is decked out like Nathalie Wood. A short while later the video cuts to a scene of Franco/Dean attempting to anally rape his nagging mother at the foot of the iconic staircase of the Stark home, a project he abandons only to attempt the same depredation with his old man, played here by the artist himself, Paul McCarthy.

Rebel Dabble Babble was the name of this gleeful obscenity of an art installation, which was created by McCarthy and his son Damon along with a troupe of actors and video makers, some of them from the porn industry. As I mentioned in a previous post, McCarthy, with his sick jokes and his fuck you shit-aesthetic, is an art world luminary, a contemporary clown-sorcerer who rides on our strong affective responses to the material he presents, not, one senses, to fuel some elevating transformation, but simply to investigate and illustrate how the processes of artistic entrainment actually function. On Traction, it is as if someone had taken the primary and secondary cultural material that goes by the name Rebel Without a Cause – the actors, the cutlery, the method-acting, the gravy, the rumors of off-set hanky panky at the Hotel Marmont – packed it tightly into a ball, buried it in a hermetically sealed vault, and then, several decades later, gave McCarthy the keys. Over the course of time the various intensive differenceswithin this ball of cultural material have evolved into the grotesque Baudelarian soap opera that now spews its toxic fluids all over the walls of the Box Gallery. Small flaws and distortions have metastasized into an anti-sublime masterpiece; retrograde tendencies and perversities seeded deeply in the original material have flowered into shocking monstrosities. We relate to the work, recognize something of ourselves embodied within it, because, truth be told, this sort of intensive process is taking place within us all the time.

Oh, god, here comes Jim Backus again on his hands and knees. He’s naked, and you can see his flabby backside, his pursed, discolored anus providing a still point around which the entire installation seems to revolve. On another screen we’re in the bedroom to which Backus, stumbling with his pants down around his ankle, has chased Natalie Wood. We stay close on Natalie as she crawls beneath the bed and encounters…none other than Sal Mineo…! He’s just hanging out there, apparently, face down on the carpet, ready to make small talk…! Daddy Backus, meanwhile, starts jumping up and down on the bed above them – what a nightmare! And now Backus has climbed up on the footboard and is attempting to screw himself on the bedpost…! And, for the love of Christ, the guy is not even erect. How disgusting.

The distinction between intensive and extensive properties is a basic principle out of 19thcentury thermodynamics. The contemporary Deleuzian theorist Manuel DeLanda illustrates the difference between extensive and intensive by comparing a regular geographical map (based on extensive properties) from a weather map on the evening news (intensive properties). Extensive differences, like differences in latitude and longitude, are linear, additive and inert; intensive differences – like differences in temperature or in barometric pressure – drive processes, like the weather. Like any artist, McCarthy is intent on generating intensive differences in your internal weather system in order to drive a process of transformation within your modes of relating to experience. Designed to outrage and offend, McCarthy’s work rebels against bourgeois ideas of quality, and focuses all its energies on generating the affective differences that will drive a process of becoming in our psychic software. McCarthy never foregrounds any hint of higher purpose, but the task of waking us up from the dream that we are solid, permanent entities, separate and apart, clearly defined and continuous in time the way Rebel, Dabble, Babble does, is rich and complex enough to justify entire galaxies of creative work.

What I’ve described above pertained to footage on the screens in the first room only – as a whole the exhibit included thirteen projections, all running simultaneously in half a dozen rooms. I could hear the screams, and the vituperations, and the tender nothings from the other projections as I turned and examined the wall-sized staircase set splitting the big space in two. This replica of the iconic staircase in Rebel was on its side, the carpet at the top encrusted with an Ed Kienholtz-like smear of pork chops with potatoes and gravy amid broken cutlery. In the bathtub, a man’s body you’ve already seen too much of the first moment it enters your field of vision makes noises in the water with his fanny. A slender Natalie Wood lookalike walks naked down the stairs in a dim twilight, a moment of random lyricism. One of my favorite parts involves and “extras”-type interview with the young actress chatting amiably about what it was like to spit on the Jim Backus character.

McCarthy’s work blends well with the Freudian technicolor of Nicholas Ray, that edge of operatic and faintly hysterical tackiness that lurks around the edges of such Ray classics as They Live by Night and Johnny Guitar. Resembling R Crumb in his unflinching honesty and his love of the grotesque, McCarthy uses James Franco to put a stake in the heart of Warholism, and its cheap infatuation with celebrity. “It’s all a little hard to believe,” the mind groans, watching the carnage and the fluids. “Have we really come to this?,” we say with a sigh, restaging for ourselves the over-familiar trope of the scandalized bourgeoisie that came of age with the steam engine. But is art just a variation of porno and sewage through which the grotesque body of the great white father crawls around on his hands and knees? Another part of us is laughing. This is no way for the Master Discourse to behave – ha-ha-ha! Rebel Dabble Babbleis begging to be called degenerate by somebody, but the world just keeps showering McCarthy with money and acclaim.

McCarthy’s art is never meant to deliver salvation; his anti-sublime aesthetic offers non-teleological transformation. One of the most interesting aspects of McCarthy’s work is how free he is of the powerful affect of shame, whose dominion over our lives is much deeper than most of us are typically willing to acknowledge. The current vogue in Affect Theory is based on the work of iconoclastic psychologist Silvan Tomkins, whose Affect, Imagery, Consciousness(1957), categorizes nine affective states as a biological foundation of human psychology. Despite its profoundly non-Freudian framing, Tomkins’ work has moved inexorably to the forefront of contemporary theory, and his late text The Many Faces of Shame(1987) figures prominently in that slow emergence. McCarthy’s freedom from shame gives him a certain mobility with respect to the lurid banality of contemporary America; if Jeff Koons locates the sublime element of kitsch, McCarthy drags it down into the gutter and rolls around with it, grunting. Strolling through the various rooms of the exhibit you can feel something drain away, leaving you lightened.

What is it, one is reminded to ask again, about poopoo and peepee? Defending the work from those who would write McCarthy off as simply infantile and regressive, one might cite the affective engagement of early tantrikas such as the Pasupata practitioners first mentioned in the Mahabharata who, like the Greek Cynics, “adopted practices deliberately intended to attract rejection and dishonor” (Geoffrey Samuel, Origins of Yoga and Tantra, 241). If such behavior is unthinkable today, it’s interesting to look back to the 60s and 70s when McCarthy began his career, learning to exploit the triggering potential of our aversive encodings. We really have lost sight of how far to the right the cultural pendulum has swung, leading to the question: were they in control of the world, would McCarthy’s violent, anally explosive creatures be more or less likely than we are to royally fuck everything up? Before answering the question reflect on the other iconic role Jim Backus created: Thurston Howell III of Gilligan’s Island. A caricature of arrogant wealth during the run of the series, Thurston now returns to run for President as Mitt Romney in an America drunk on its own idiocy.