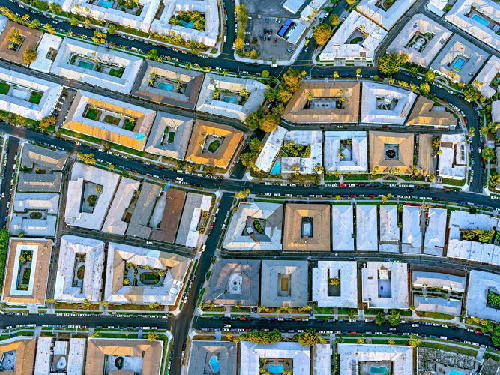 I’ve been writing lately about this experience you can have in a sitting practice of non-separation, and how fundamentally it clashes with our commonsense view of ourselves as being unique individuals who exist separate and apart, distinct from all others, clearly defined and continuous in time. Interesting to me is the boundary between these two contradictory ways of relating to experience, the separate and the non-separate. Perhaps because of my work as a theater artist, I experience this boundary very much like the border of a stage. When we practice meditation for a while, we learn to experience a strong reactive emotion without enacting it—the reactive emotion still does its thing, but it is now at a slight remove from us, exactly as if, again, it were performing on a stage. Across that imaginary line all our fears, hopes and sorrows leap into life, a vivid promenade of fantastic creatures signaling through the flames before subsiding into empty space. We stumble across some trigger—the glance of a stranger that evokes the way our father turned away from us when we were five, say, or perhaps the way the light filtered through the trees one morning year ago in our back garden—and the tent show runs, threatening to carry us away. Back in those shadows upstage, check out my greed in his sharkskin suit as he sharpens his switchblade. In the spotlight to the right, meanwhile, my criminal passion begins its little striptease, and, right over here, ladies and gentlemen, please observe the shivering albino land squid of my shame as it juggles its collection of china plates and inflatable plastic beach balls. Oh, and over there—look fast—the galloping Mongol horde of my anger has gathered to decimate the cities of Europe.

We can view these reactive patterns as little affective memory systems that run automatically, and that have an inherent adaptive dynamism to them. In order to survive they need the energy of my attention; if I manage to withhold that energy, they run out of gas and collapse. And where am I while I witness this colorful circus? I am nowhere, in a middle-way state of indeterminacy that is ticklish, subtle and difficult to sustain. In effect, to stretch the metaphor, these reactive affective patterns want me to forget about the middle way and partner on the stage of separation in the project of making themselves into “real” form-based entities, separate and apart, distinct from all others and continuous in time. If I take this fateful step I am no longer an autonomous being, but fall under the sway of the inexorable dynamics governing the realm of separation, which draw me further into “suffering.” The crux of an awareness practice then becomes how to maintain a precarious balance, aware at one and the same time of my being as a separate autonomous form, and also as an “empty” clarity in which experience ceaselessly arises.

Since finishing my last post The Bodhi Tree and the Turin Horse one little coincidence of language has been haunting me—how the “middle” in Aristotle’s “law of the excluded middle” (one of the three laws of non-contradiction) aligns precisely with the “middle” of Gotama’s “middle way.” In an email exchange about the post, Zen teacher Henry Shukman of Mountain Cloud Zendo in New Mexico made the same point, coining the phrase the excluded middle way to describe the dharma. Aristotle used “the law of the excluded middle,” let’s recall, to banish from thought the specter of paradox—those propositions that arise between true and false, in the middle, as it were. The law is generally translated into something like:

So, according to this law, the idea that we exist separate from the world we perceive is either true or it is untrue. And yet the two sides of this proposition are both, again, entirely legitimate, but also entirely contradictory modes of relating to experience, and the “suffering” (dhukka) Gotama locates in our typical mode of being arises from the endlessly futile effort to reconcile them. The capacity to shift back and forth between these two different modes of being—between samsara and nirvana—requires a surrender, a surrender precisely of the demand for non-contradiction. The contradiction or paradox of separation and non-separation—the excluded middle—thus operates at the heart of dharma practice, which explicitly embraces it.

This topic may sound dry and academic, but I believe it relates directly to the precarious position we find ourselves in here in the second decade of the new millennia. Surveying the dark horizon of climate change, resource depletion and social injustice, wouldn’t it be nice to locate the bit of ideational code driving the big jalopy of our dysfunction? Since complex systems are famously sensitive to “initial conditions,” wouldn’t it be nifty if we could reach back to the bedrock of our culture and perform a little oncogenetic cultural surgery, a splicing operation that would then allow new and more promising regimes of thought to flourish, eventually giving rise, perhaps, to new and more sustainable cultural paradigms? Well, a good place to start such an archeological operation would be around the laws of non-contradiction that were formulated by Aristotle as the engines of Western dynamism revved up for the first time. When Aristotle banished contradictions, he gave birth to binary logic, launched our technological evolution and also, arguably, jump-started our uncontrollable cultural dynamism. The demand for non-contradiction has also driven the mind-killing “metaphysics of commonsense,” ever the preferred discourse of tyrants and fascists as they take center stage and seize the instruments of power.

Okay, so if the law of the excluded middle is the cornerstone of Western logic, what are the implications of removing or revising it? What will happen to the many social laws and customs and the proliferating technologies Western logic has given rise to? Recent developments in science and philosophy, it turns out, actually support Gotama’s core, “middle-way” recognition—that our position can only be understood as bothseparate and non-separate from world. The philosopher Graham Priest (among many others unknown to me, I’m sure), meanwhile, has been exploring forms of logic that replace the binary of true and false with two other possibilities: both true and false, and neither true nor false. Not surprisingly, this dialetheistic form of logic was explored in great detail by the Buddhist logicians of the Mahayana school, which flourished around the philosopher Nagarjuna (c 150-250 CE), and later flowered into both the Zen and the Vajrayana traditions. This “four-cornered” form of logic resides also at the heart of ongoing efforts—lavishly funded by the federal government—to create a quantum computer running on q-bits that can be either on, off, both on and off or neither on nor off.

Framed like this, the middle way suddenly offers up its own functional logic, becoming a part of our future as much as our distant past. I am not a logician or a technologist, so I am not promoting here some utopian idea in which new quantum technologies arrive to save the day. Rather, what I am interested in is the way the bedrock postulates of a widely embraced system of logic bleed into political culture and our everyday sense of ourselves, and of the capacities of experience. The “Aristotelian detour” into a false and reductive love of certainty has, meanwhile, arguably placed us in a precarious position, our survival as a species increasingly in doubt. In an era of quantum technologies the commonsense binary of categorical truths and falsehoods is what seems out of date, regardless of how orange your hair is when you club the ground and grunt.

Guy Z says:  June 9, 2016 at 10:13 pm  W ell put, Rita. I’m using the metaphor of the stage in a way that has its limitations…but at the risk of pressing too hard, I’d look again at the statement you quoted: it’s the energy of attention that these kleshas feed off of parasitically and bind. Attention is then unavailable for wisdom or compassion on any level…much less the kind of transformational practices you’re describing. But, again, it’s a good point and a very nice overview of advanced practice too — thanks for posting.