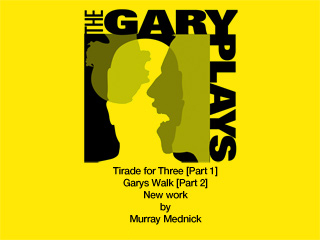 The Gary Plays are an octet of plays portraying economic and spiritual distress in the contemporary urban wilderness of Los Angeles. InTirade for Three, Gary, a destitute actor, comes to terms with the senseless and random murder of his son. In Gary’s Walk, he conveys via shopping cart his son’s ashes to the sea. In Girl on a Bed, he ponders the death of a high school girl who walks fearlessly into lethal realms of pornography and junk. Other characters reoccur throughout the three Gary plays, including two former wives, his former agent (Todd,) and Antonio, a Latino angel of death. In Out of the Blue (Part IV), Gary visits the death bed of his mother, Mama Bean and takes a trip into the underworld for final answers about Danny’s death. In DaddyO Dies Well (PArt V), Gary takes the visionary South American drug ayauasca with his step-father, who’s on his way to meet Mama Bean in the afterlife. In Gary’s Nightmare Audition (Part VI), Gary is forced to compose a play himself, and the play becomes Part VII of the series The Fool and the Red Queen. In the eighth and closing play in the series, Charles’ Story, Gary undergoes rehab for a drug addiction he doesn’t actually have, learning more about Charles, the father of Laura from Girl on a Bed.

Taking these various journeys with Gary is a “chorus” of inner voices that articulate the fears, griefs and aspirations that make up his inner world. While on one level these figures represent refracted aspects of Gary’s psyche, they also speak directly to us in the audience. Straddling the line between audience and play, they draw attention to the various ways we participate in, and are implicated by, the events onstage. Murray has quite literally re-invented the Classical chorus in a modern context. Technically, this use of a chorus liberates him from a narrowness basic to stage convention, restoring literary freedom to the art of theatre-writing. In so doing, the chorus opens the stage fully to the poetic dimension I described above, so that character now begins to take on the emergent quality of Murray’s dialogue. As they morph effortlessly across boundaries of age, gender, ethnicity and type, Murray’s choral figures underscore the essentially fluid, transitory nature of the self.
Guy Zimmerman

“These plays are not structured in the usual way,” explains Mednick. “My writing is driven by a poetic impulse, by the language – which turns out to be at the heart, the essence of theater. So the result is more visceral than “dramatic,” more lyrical and story-oriented than plotted. These plays are very theatrical stories about Gary, an ex-actor, an Everyman, an American soul wandering the city of Los Angeles.”

“A staging of The Gary Plays, the first three works in a tetrology by Murray Mednick, is one of the most engaging and ambitious local theater events of the past few seasons…. Mednick’s Gary is a sort of L.A. Leopold Bloom… The Los Angeles River may be a mere trickle compared to the River Liffey, but The Gary Plays surge with a desire to find–in the seemingly mundane wanderings of one man–the very soul of a city.” – James C. Taylor, KCRW Theatre Talk

“Under Zimmerman’s seamless direction… Mednick finds a… moving vehicle to convey his own despair at our culture’s soul-sickness. ‘Girl on a Bed’ is a direct hit at the broken heart of the matter.” – Rob Kendt, Los Angeles Times

“ ‘Girl on a Bed’ turns Greek tragedy into a kind of metaphysical movie… a haunted and haunting evening of theater that tells us our lives are often not about us, but other people. PICK OF THE WEEK! “ – Steven Mikulan, LA Weekly