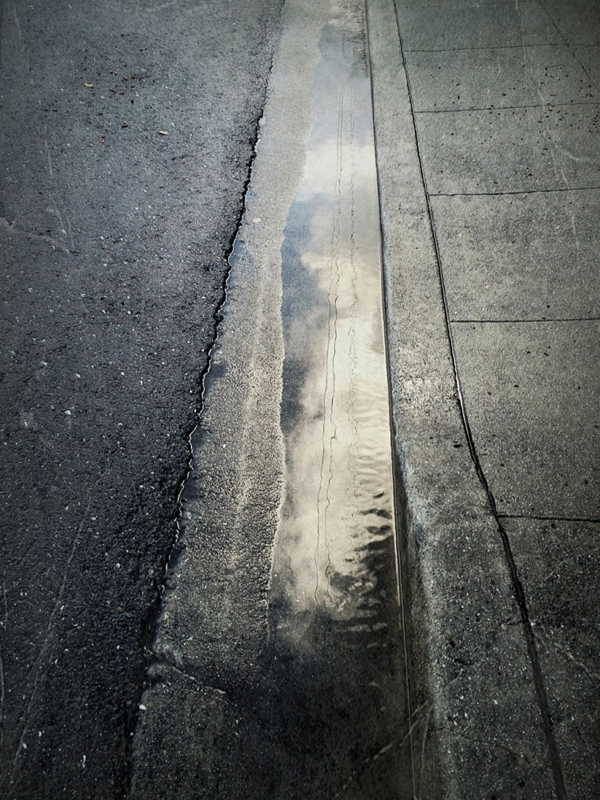 Of fascination and its opposite —
Behind the house in New Hampshire where we lived when I was young there was a steep, overgrown hillside, and, at the bottom of the hillside, a wide parking lot. Marking the far end of the lot a stream curved and turned back on itself, eventually flowing out through a culvert that ran beneath the road. I’ve always recalled that stream with a very particular fascination, but the true nature of that fascination only settled into language a few weeks back. It’s as if the trace of that experience had been concealed somewhere in my body, and now, holding an asana in a studio in Silver Lake, something came open, releasing or “unconcealing” that trace into words. Pondering that moment, I feel my age, and recall how my grandfather Tony, toward the end of his long life, often travelled back into the years he spent as a young man “beside the River Blue” in Eastern Arizona, an idyllic time full of plump game, lively music and pretty women.

What affected me so strongly as a child, I realized there in my half moon pose, had to do with the mysterious way the stream at the edge of the parking lot retained its integrity as a single thing while also shifting and changing its qualities as it shouldered along, cutting through the earth. What was it, I wondered, that made something so changeable so clearly also a single thing? I would stand there mesmerized by the shimmering water, and by the sound it made between the banks, wondering how I also could be only a single thing, given how changeable my experience was of a world that rushed through me like water. It would be easy to decide I am now merely projecting these ideas back on my childhood, imagining that this was my experience of the stream across the lot, but the sense I had, there in the yoga studio, was, again, of the decades falling away, and the bare truth suddenly releasing itself into words. “Every child is a metaphysician,” a philosopher once said, suggesting that before we can find the right words for the recognitions that interest and excite us, we are propelled instead toward the dark culvert of socially mediated identity that runs beneath the road.

In moments of transport like my time by the stream, we feel as though insight seizes the mind, and this is because the insight arrives as the result of a lowering of one’s guard, an opening. Insight arrives through an act of not-doing rather than through an effort of will, in other words, as if the insight were already there, beneath the hyper-active operations of the self. The existence of a substrata of knowing we occasionally drop into, or that occasionally rises up, is an old idea, mysterious and elusive to write about, but we all know it in our bones. On some level we all wonder how that rich, connective experience can be reconciled with the differential frenzy of our lives as social beings, the storm of identities and shifting self-images that acquire such implacable momentum, driven by fervent narratives of hope and loss in which we can be transformed from heroes into rejects and back again with bewildering rapidity.

To anyone familiar with Buddhism, “doing nothing” is a loaded phrase; Mahamudra and Dzogchen, which are the final “completion” practices of Mahayana Buddhism, involve precisely the instruction to “do nothing.” The reason these are completion practices is that they are supremely challenging, not simply because they are elusive (which they are), but because they involve ceasing to do all the things we were happily unaware we were doing constantly and repeatedly, moment to moment. For the meditator, this cessation entails highly-charged confrontations with the various affective traumas that come with the terrain of human life, but that we learn to push away through various repression or sublimation strategies. When you “do nothing,” all that affectively-charged awareness comes rushing back, and it probably has not become any easier to deal with in the interim.

It’s intriguing how easy it is to reconcile tantric ideas about the processes of awareness with systems thinking. Do you know about the Affect Theorywork of Silvan Tomkins? In the 1960s and 70s, Tomkins applied systems-thinking to an account of the basic embodied feeling states that, in his view, define our experience of everyday life. Tomkins deploys metaphors of collapse to describe the way an open, connective state of mind can abruptly shift down into a contracted ego-state infused with negativity and flowing along some mechanistic narrative track. Tomkins offers an account of how shame – by which he means a spectrum of feeling tones from simple shyness all the way up to complex self-loathing – functions as a response to the sudden interruption of the more basic affect of “interest and excitement.”

I find it intriguing how both these affective states meet in the gaze of another person – the famous “mirror phase” for example, when our sense of ourselves as independent beings begins to gel under the intense and (hopefully) loving gaze of the (m)other. Experience is most captivating when we merge with the expressive flow we encounter in the stream of the eyes of the Other, in other words. But in Tomkins’ account, when the longed-for connection fails to manifest, these eyes can also trigger the kind of affective collapse described above. Then it’s as if the gaze of the Other acts like a huge lever, raising him or her into the heavens, while hauling us down into the depths of the abyss. From Cervantes and Dante to James Joyce and Roberto Bolaño, the paradoxes and complexities of our relationship to the beloved have always been, of course, a mainstay of literary art.

One unfortunate thing about shame is its recursive and self-entailing nature: I am ashamed that I am ashamed that I am ashamed. And, true to its nature as a complex systems, shame has an adaptive, self-entailing capacity: driven by shame we do things we are ashamed of. Historically speaking, you will find this affective state referred to as “original sin” or, in the modern era, “alienation” or “lack.” Shame, to Tomkins, is not just an emotion, it’s a totalizing process that fundamentally alters our interactions with the world, arriving with an elaborate idea-structure about reality and a set of compelling narratives about ourselves and our relationships to others. Shame is a thinker, a theorizer, a spinner of conceptual webs and, perhaps most of all, a convincing teller of tales. But perhaps the most salient point about shame as described by Tomkins is that people will kill themselves to avoid feeling it, and they will kill you too, easily, in order to avoid the feeling, or in service of an idea or belief system that seems to offer permanent relief from it. Expressed collectively, shame leads to episodes of madness like the Third Reich, a “culvert beneath the road” if ever there was one.

What would a world dominated by the affect of shame be like? Well, look around you. Capitalism can be viewed as a “shame affect theory” in which we hide from the shameful truth of what we are doing, tucking it away in distant corners of the globe in the form of “externalities,” or burying it like radioactive waste as we shamelessly pursue a permanent happiness forever out-of-reach. Tomkins viewed affects from an evolutionary perspective: the negative incentive of shame helped human beings seek out and maximize experiences of “interest and excitement.” And so, today, having separated from the world of our experience, we divide that world up into parts we want more of (greed) and parts we want less of (aggression). It goes without saying that these mechanisms are precisely what drive the consumer economy, as well as the institutionalization of aggression that is the military-industrial sector (the historian David Loy is very good about this).

Affect Theory offers a way to understand our planetary situation: it is deeply shameful what we are doing to the earth, and yet the fear of this knowledge drives us deeper into our search for oblivion and distraction through, yes, more shameful behaviors. Somehow, the maximizing of positive affect switched at the birth of the modern so that, no longer an adaptive asset, it has become a liability. If this seems daunting, perhaps we should remember that shame presupposes love – or the enjoyment of the other, the thrill of the other’s gaze. The payoff for survival is there, in that our basic, ground condition is actually energized and positive, joyful even, and it can perhaps best be enjoyed…by learning how to do nothing, perhaps beside a stream.