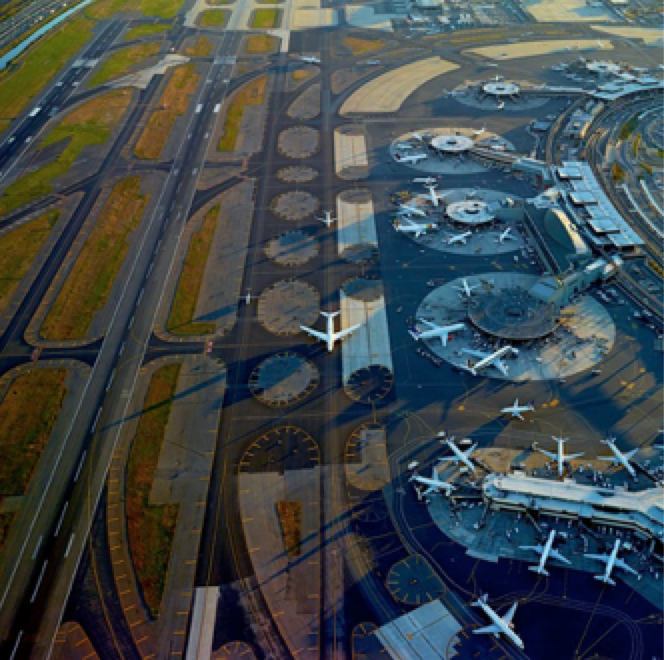 Like pharaonic retainers the passengers leaving the Swissair terminal ahead of the Yellow Man seemed to convey all his worldly possessions into the vast crypt of the LA basin, where he had descended to breathe his last. Out walked American teenagers in t-shirts and European couples in sensible shoes and families shouldering towers of suitcases on rolling carts. Finally the Yellow Man himself emerged, in a wheelchair pushed by my mother, who had accompanied him to the clinic in Switzerland and stood by as the doctors there relieved him of the mercury-based fillings in his teeth, and administered various other treatments not available within the U.S. health care system. Earlier in the week some threshold of medical propriety had been crossed, the clinic politely suggesting a return to America might be in order, and we got news of the Yellow Man’s impending arrival. Finding ourselves alone in his room at the UCLA Medical Center a few days later, the Yellow Man pulled me close with one thin hand, and asked in a whisper if I would accompany him on a trip to the Amazon to see John of God, in whose hut were stacked hundreds of crutches dropped by the terminally ill after they had been restored to health by John’s singular magic. I told the Yellow Man we could leave the next day if he liked, and then the attendants arrived and I walked beside his gurney down to the basement where the final operation took place. The family gathered the next day in the small room back upstairs as the Yellow Man lay unconscious, and then, alone after visiting hours with my sister Eve, in the falling darkness, died.

Each day the meditation sequence I follow includes a meditation on impermanence – a death meditation. The instruction is to contemplate the moment of dying, the specific sequence of responses that roughly parallel the stages of grief – denial, bargaining, anger, depression, acceptance – cultivating a specific affective response to each stage. Death meditations of one kind or another are common within the sprawling galaxy of Buddhist practice traditions, and they present some very obvious challenges and some less obvious rewards. It’s not uncommon for me to complete the sequence of meditations and discover I have left one out – it is always the death meditation. While I know I will die, I still don’t believeit, and my incredulity reminds me of the Yellow Man and the apparent contradiction of his death bed conversion to the ministry of John of God. This leap of faith didn’t so much fly in the face of the Yellow Man’s lifelong devotion to reason and logic as indicate its shortcoming as a source of wisdom.

The Yellow Man was only yellow at the end. When we first met he was tall and handsome, aristocratic, endlessly genial and urbane. He and my mother had known each other in England in college. Back then Alexis – this was his name – had dated my mother’s best friend, and now, two decades later, my mother and Alexis had met again. In the weeks following their visits there would be long phone conversations into the night, the cord of the telephone disappearing into the laundry room where she sat against the dryer, made young again. I was twelve or thirteen at the time, and the news of this love affair arrived as if in answer to fervent prayers. This remarkably generous and warm human being seemed to have stepped out of a romantic novel holding a bouquet of flowers. Alexis was undeterred by my mother’s four children, or by our relative poverty, or by the distance that separated Dutchess County, New York from Boston, where he had grown up and still lived, an eligible bachelor from an old Brahmin background. There was a doctoral degree in Philosophy to secure — a bout with hepatitis (Alexis had been yellow once before) ended his career at Oxford before he was able to complete the dissertation on inductive logic, which would now need to become a book.

In the basement of the house Alexis provided for us in Milton, Massachusetts I once played Foosball with a billionaire. Well, he’s a billionaire now; probably back then he had only reached the nine figures. Alexis worked for this wealthy man, designing and constructing for him sections of the intricate maze of computational algorithms that in the 1980s were transforming the arts of finance into the monsters of complex behavior that today largely govern the global markets. Lean and alert, with a blinking, birdlike air about him, this wealthy man – let’s call him Bentham – announced that he had never played Foosball before. I was very good at the game and confident in my skill, but I was unprepared for the urgency of this man’s relationship to the prerogative of victory. The ferocity of his engagement shocked and amused me, and while I won the game, I definitely wanted to get away as soon as possible from the rodent-like intensity that radiated off of Bentham in a hormonal cloud.

Entering the job market in the 1970s after his struggle with hepatitis, Alexis’ background in logic made computer programming and systems design a natural way to make a living. At that time, competent programmers were in high demand, and Alexis’ blue blood background and education gave him additional entrée, but he was good at the work too, thorough and precise. When a group of ambitious junior partners – Bentham among them – split off from the firm Alexis had joined, he went with them, helping to engineer a whole new approach to the wagering of vast sums on market fluctuations. Alexis also made classic errors of judgment regarding the value of agreements and understandings reached with one’s peers in forms other than the most binding of legal contracts. When the new firm run by Bentham and two or three others began to rake it in, Alexis was lucky to end up with a few crumbs off the table, and the stress and humiliation of the experience did nothing for his drinking or his emotional health. This all happened long after I had left home, but I was aware of what was going on and oddly enough felt embarrassed for the men who so casually dishonored themselves in this unthinking way. It goes without saying such self-dishonoring is the societal norm, and also that Alexis’ suffering hardly registers on the scale of how most life forms on the planet currently experience the greed and aggression that drive it.

At night over dinner as the wine flowed back in those days, Alexis and I would discuss the history of philosophy. We used to argue, yes, about Nietzsche, who was impolite enough to point out that no belief is as seductive as the belief in the idea of Truth, which, in his view, was simply a metaphor that had forgotten its figurative nature. To Nietzsche, this belief in truth, which he traced back to Socrates, is always fueled by a covert aggression against that which is deemed to be false, and its seduction resides precisely in how, by way of this toxic affect, the belief in truth delivers an underlying sense of unity and order. That part of us which longs to be separate and apart, distinct from all others and continuous in time gains crucial traction in the domain of the true. And yet, the ego’s sense of commanding unity requires always the deployment of this affect of negation, this death-energy, which Nietzsche named ressentiment, and it’s no wonder that the culture that arises from this embrace of unity and Truth (i.e. the West) is also in danger now of killing the planet and all the life it contains. In my own experience it is precisely this affect I confront in myself through the impermanence practices.

In many Buddhist traditions, impermanence meditations are viewed as preliminary practices. Coaxed into conscious awareness, the idea is, our fear of death will cease to dominate our behavior from the shadows. Engaging with the actual nature of our situation as living beings, they say, can deliver a kind of fearlessness and a clarity of vision, and I can see how this would be the case. While I can’t say that my own engagement with such practices has succeeded in convincing me that I will, in fact, confront my end, the death meditations reliably deliver a kind of energized peace – a subtle but pervasive joy. I would have wished for Alexis to have had access to emotional resources of this kind when he returned from abroad, ill and in his final decline. It was hard to see him suffer as the coping mechanisms he had developed over the course of his life abandoned him in his proverbial hour of need. Since he had to die, I would have preferred for him to make his death his own rather than run from it as if from an enemy.

Please let me know. Thank you for another beautiful piece of writing.