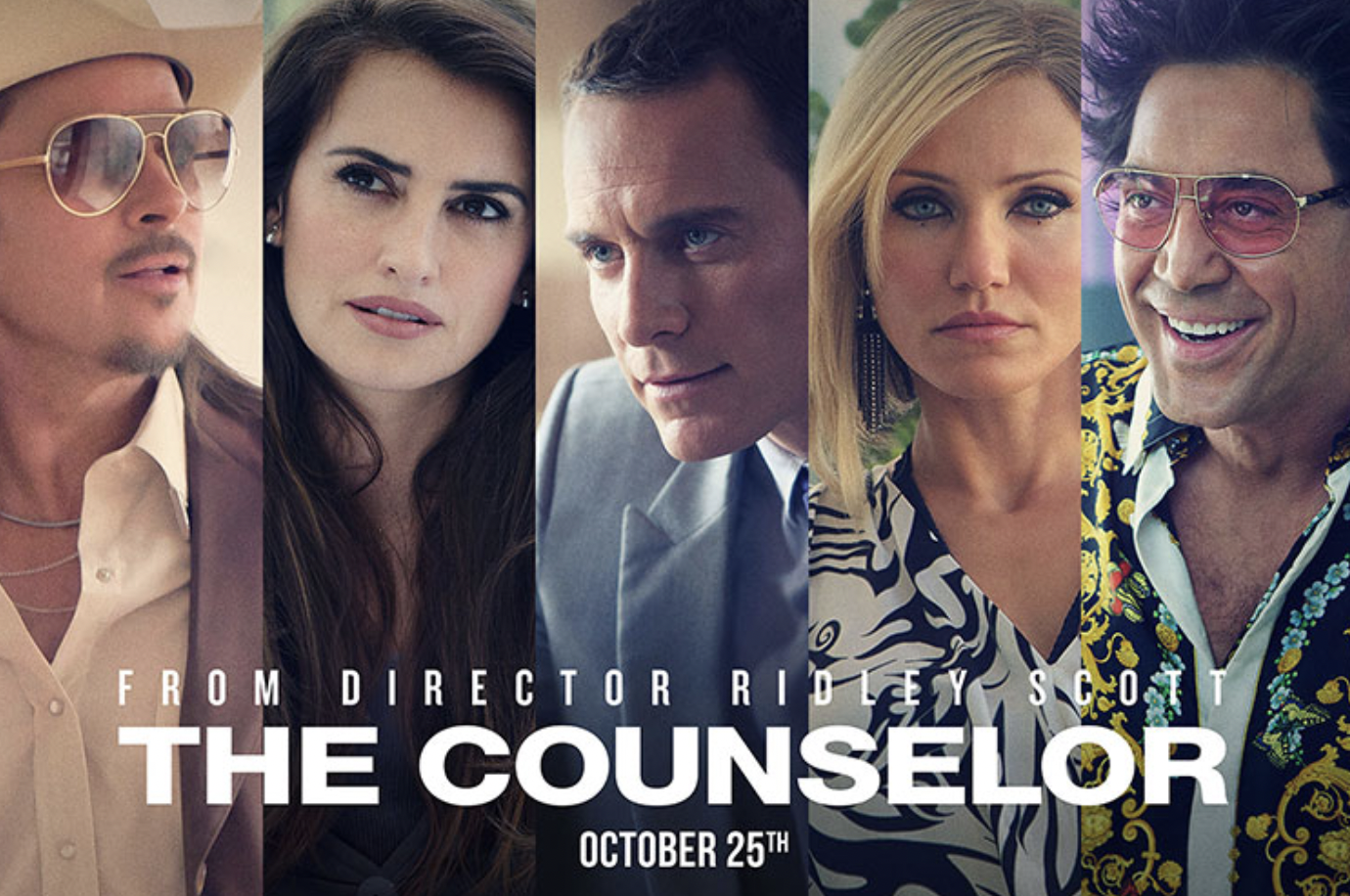 A friend tells me about the formatting – how with his script for The Counselor, the novelist Cormac McCarthyisn’t even bothering with standard screenplay conventions anymore. Obtaining a copy I see that, sure enough, McCarthy has stripped away all the awkward visual notations that make screenplays so tedious to read. He opts instead for a minimalist layout, with a central column for dialogue, and block-like paragraphs for scene descriptions delivered with a minimum of camera notation. On the page the script looks almost like a Doric column – stark and Classical – which is appropriate given the tale’s astringent stoicism.

The Counselor is also perhaps the first screenplay written about a new device for killing ones enemies. I’m talking about the nifty bolito, a palm-sized, battery-powered motor with a looping wire attached to it that, once dropped over someone’s head, tightens inexorably around the neck until it severs the carotid artery with a spray of blood, perhaps even taking off the entire head as it grinds down toward a circumference of zero. Those familiar with McCarthy’s No Country for Old Men might point out that it too featured innovative assassination techniques — Anton Chighur’s pneumatic cow-killing contraption. In The Counselor, however, the bolito provides the central image of the film, resonating powerfully, on one level or another, in almost every scene. Parodying the businessman’s tie, the bolito makes itself known most obviously in the ultimate beheadings of three characters. But the ring of global finance in the film also operates in a way analogous to the bolito – as a murderous and inexorable engine, ratcheting downwards by way of the mechanisms of debt and debt-related social and criminal violence. The loop of the bolito is echoed too in the engagement ring the Counselor (he is never named) buys in Amsterdam and brings back home to El Paso, presenting it to his girlfriend, Laura. The bolito appears in the looping path of “the traveler,” a dead body packed into a barrel along with bricks of cocaine in a macabre joke played among drug dealers. And Bolito-like loops even characterize the scenic structure of the film – it is composed almost entirely of two person scenes, loops that close around a nullity of greed: all is transactional here.

The diamond is another image McCarthy uses in The Counselorin ways closely related to the recursive death loop of the bolito. In a marvelous cameo early in the film, the German actor Bruno Ganz appears as a Hasidic diamond merchant in Amsterdam. Giving the Counselor a quick primer in how to gauge the value of a stone, this Dealer (he is never named) explains that anything you can say to describe a gem is in the nature of a flaw — the perfect diamond would be imperceptible, composed “entirely of light.” McCarthy’s thinking is subtle. If the ring is a version of the bolito, the diamond is the head that gets decapitated. At issue here is the relationship between the “diamond” of abstract thought and the symbolic Other of money, which powers the market economy, but with some very unpleasant hidden costs.

The Counselorcloses with a sequence in which the baroque structures of global capital flows are “clipped” in the form of a laptop taken from a principle character as he is being decapitated by a bolito. In the end, the villainous Malkina (played by Cameron Diaz), gets the briefcase with the computer – and the diamonds she can carry in the palm of her hand, as light and portable as the lethal bolito. Comparing notes with a wealthy Swiss banker, she laments the plight of humanity as we confront the tightening loop of our collective dysfunctions – our violence and our greed – in language calibrated to chill contemporary audiences. Malkina is the latest incarnation of the evil demiurges who figure in many of McCarthy’s previous novels – beings like Anton Chigurh or Judge Holden of Blood Meridian, for example, who reign over the physical world with bloodshed and terror. With her feline tattoos and her pet cheetahs, Malkina is a becoming-predator, as if she had given up on our fatally confused, dishonest species in favor of animals and their immediate engagement with the world of experience. 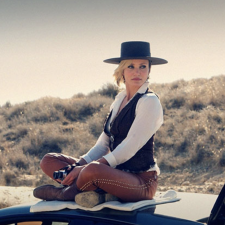 What is McCarthy trying to tell us? At the core of The Counselor we are given a long disquisition by a drug lord (“Jefe” played by Ruben Blades) delivered via telephone. The Counselor has come to Mexico in hopes of rescuing his fiancée, and the phone call is as close as he will get. The drug lord is direct, and elegant in his thinking about fate and human agency. He explains to the counselor that with our actions we give birth to worlds, realities that run their course and then subside. The imagery is Greek in its stoicism, but also Eastern. Using the word karma requires disclaiming the way it has been deployed by elites in various highly stratified Asian societies to perpetuate exploitative social systems, but karma (Moira, is the Greek version) is what McCarthy is looking at. A Buddhist teacher once conveyed the subtleties of karma by describing how the thief, through the act of stealing, comes to know the world to be a place where people cannot be trusted. In such a world it makes senseto steal, and so it is very likely the thief will steal again…and again. The feedback loop between our actions and the world we experience resembles the bolito in its mechanical inexorability. This view of the inseparability of acting and knowing fatally complicates the free-will-versus-determinism binary that has often preoccupied ethical thinking in the West. Denying our intimate connection to the world, we have become blind to the suicidal dimension of our ways of living…and we now feel the bolito beginning to tighten.

How to assess Ridley Scott’swork as a director here? Meh. The casting is hit or miss. Perhaps the most damaging flaw is the lack of chemistry between Fassbender’s Counselor and Penelope Cruz’s Laura. There are other problems, large and small. The alterations made to the script in the process of filming are respectul, but inevitably they blunt the sharp edges of McCarthy’s implacable vision. The filmmaking is not great, in other words, but why harp on the negative? The filmmaking of No Countrywasn’t great either, and it doesn’t matter in the same way – both films are about the writing. McCarthy has earned a degree of credibility that somehow forces everyone involved to do their utmost not to screw things up. Where ego still exerts itself to weaken the work we have the sense it is unconscious, and a source of embarrassment – everyone is on their best behavior. With his seriousness of purpose, his expansive yet understated vision, and his literary chops, McCarthy redeems the project of dramatic realism in an age where it was been deployed for the most banal and artistically indefensible purposes. Despite all the film’s perceptible flaws, McCarthy’s deep reflections and resonances linger in disquieting ways long after we leave the theater, haunting us like the prophesies of half-remembered dreams. I, for one, have no problem making a trip to the multiplex for that.

Alexandra Buchanan says:  September 22, 2014 at 8:41 am  I enjoyed this excellent well thought out discursive review by Guy Zimmerman. This is a film that requires more than a casual viewing to absorb the many ideas and themes presented therein. A brave performance from Cameron Diaz as the sociopath whore/fiend, hopefully her character’s world also disintegrates into pain and nothingness in some near future time. It is difficult to like any of these characters, except perhaps the young con artist who takes Brad Pitts character – she at least looks into the abyss and then backs away. A very interesting film.