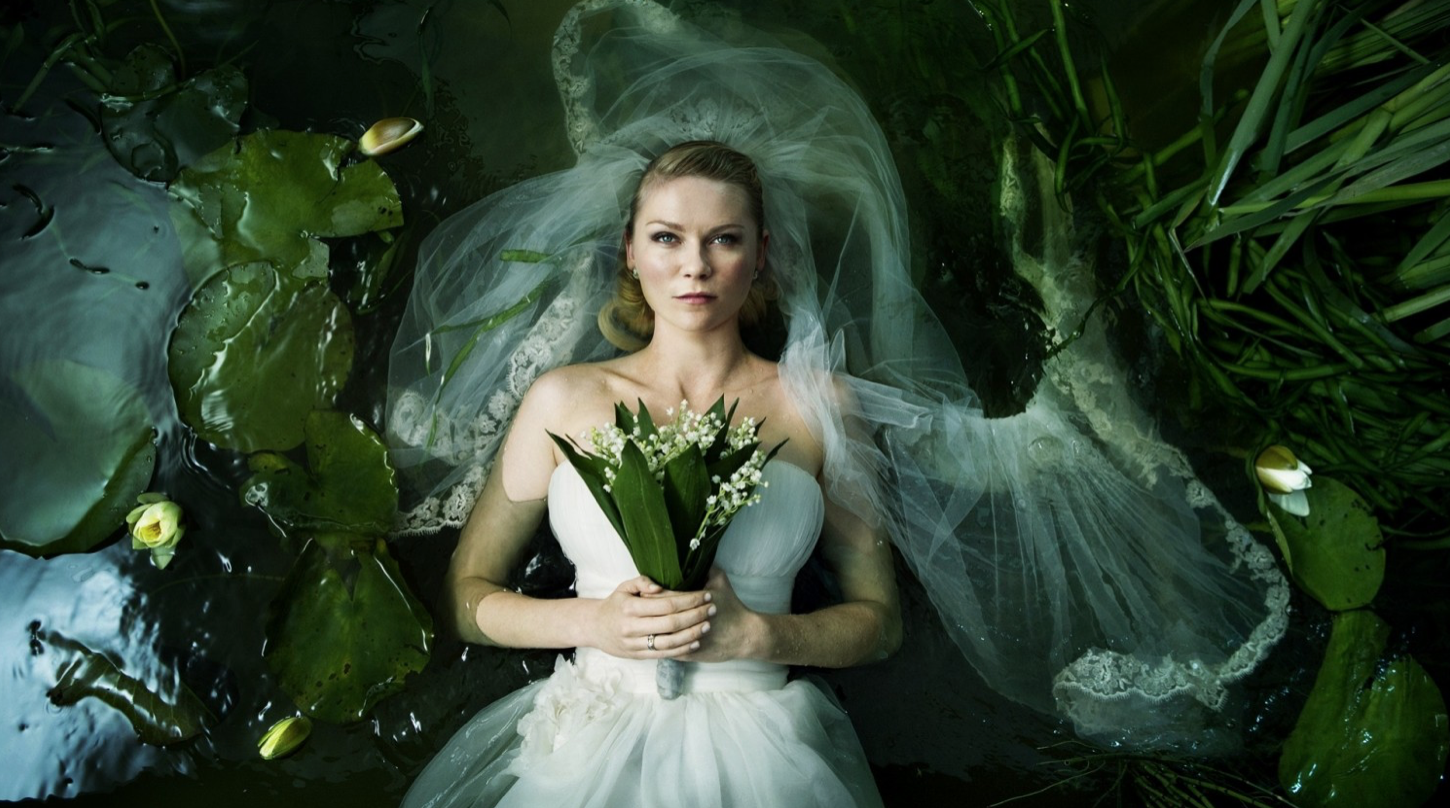 Far away among the stars a planet holds your image in its heart. You met on a summer night. A single glance was all it took. Later, in your dreams, your heart fatally divided, you beamed out a signal of erotic distress, a covert invitation. And now the planet is on its way, a wanderer, dark and brooding – a Hamlet-planet traveling a winding path toward you. The date has been set. Lying back naked on a bed of moss you wait and hope and pine, as luminous as Ophelia. Wagner, of course, loops in the background – the awe-struck Prelude to Tristan and Isolde. Your first and only embrace will be a Germanic dream – the ultimate Gesamtkunstwerk, a final all- totalizing work of art. You will not survive but nobody else will either…

When I go to the movies these days I find it useful to embrace the notion that we are witnessing the conclusion of an art form. Like the fresco during the late Renaissance, I think to myself, cinema came into being through a confluence of economic, sociological and aesthetic factors that have now shifted such that the “movie” is no longer evolving as a cultural form, but instead branches out into new, emergent forms still waiting to be named. There continue to be movies made, but they are actually re-makes of other movies (or TV shows)…or they are late stylistic distortions, like the “mannerist” painters who brought the High Renaissance to a close. I’m thinking here of Rosso Fiorentino, Tintoretto or Pontormo, the painters who closed out the great arc of the classical fresco that had sprung into life with Giotto two hundred years earlier, and reached its peak with Da Vinci, Michelangelo and Titian.

Characterized by compositional extravagances and chromatic excesses of one kind or another, the Mannerists explored the outer reaches of the form. The funders of art, meanwhile, moved from the Church to the private elite, and commissions for large altar pieces gave way to portraiture and still lives better served by paintings on canvas. Likewise, I think to myself, to the extent that cinema continues to evolve as a large-screen public projection (as opposed to cable, Netflix, or YouTube), it does so in a mannerist direction. One of the best examples of a “mannerist” auteur would be Lars Von Trier, and Exhibit A might be his recent film Melancholia.

Anchored by Kirsten Dunst’s strong performance in the lead role, the film tracks the final months of human life as a rogue planet, Melancholia, completes a collision course with planet earth. The film opens with a long sprawling disaster of a wedding, Dunst’s Justine ditching the groom at the last moment, newly committed to the planet she has glimpsed eclipsing a star in the tail of Scorpio high above. This abortive wedding is staged by Justine’s sister Claire (Charlotte Gainsburg) and her billionaire husband John (Keifer Sutherland), and takes place on the grounds of John’s lavish estate. The long second act involves Justine’s return to the estate some months later as the errant planet approaches. She looks on with great sadness as Claire and John reassure their young son that the planet will safely fly-by, a unique event to be savored later in scrap books and stories by the fire. They devise a sad little hoop contraption out of wire that gets placed on the heart like a cartoon valentine to gauge the advance or retreat of Melancholia. The planet looks so delicate in John’s fancy telescope that Claire whispers to her sister “it couldn’t hurt anyone.” Justine smiles mildly, knowing her lover’s true intentions.

Justine councils Claire to embrace the end of terrestrial life, which she views as inherently evil. In her melancholic logic she echoes Conrad’s Kurtz here, or Celine writing from the depths of the Congo about the nefarious fecundity of the jungle. Von Trier expands these downbeat self-assessments to a planetary level, creating in Melancholia a cinematic antonym for the interplanetary subjectivity of James Cameron’s feel-good Avatar. I think also here of Stanislaw Lem’s Solaris, which Tarkovsky (and, later, Soderberg) made into a film. Fresh in our minds will be the decade of socio-political malfeasance we have just lived through, the transparent villainy of our elites having given us all a Boschian sense of human malice. Watching the film we experience the covert self-flattery of apocalyptic plots – all others will be punished, as we, the virtuous elite, observe the apocalypse unfold from a safe remove.

In formal terms, Melancholia is “about” the slow motion montage of its stunning title sequence; the rest is denoument. Here is slow motion that assaults our sense of temporality, the foundation of cinematic art. In Sauve qui peut (la vie) Godard famously turned to slow motion in an attempt to extend the life of cinema by driving it forward into something new. In Melancholia, Von Trier uses the technique to free-fall away from the art form itself; a different way of knowing, non-cinematic, animates the work.

One way to view Melancholia is that the apocalyptic collision it depicts is a goodbye to classical cinematic form – a final and complete Eisensteinian collision. In Melancholia, the cinematic line of flight completes itself in global oblivion, and we shift into a register of collapse, disintegration, the formation of a cloud of earth dust between Venus and Mars, the ember of the earth’s core disappearing with an interplanetary hiss. The film’s subject is itself: the end of things, the dissolution of forms under the threat of extinction. Von Trier’s slow motion puts the issue of time into abeyance – the planetary collision is a foregone conclusion sometime later, a completion that arrives for the species that, consumed by lack, continually says “no” to its own self-completion.

The film depicts a becoming-planet that can only happen in the shadow of calamity, a becoming-planet that, like all becomings, involves an embrace of impermanence – to become a planet is also to become the end of a planet. Every true marriage, says Melancholia, is a marriage of destruction, a move out of the terminal ambivalence of depression, toward a new embrace of mortality, particularity, immanence. The state of melancholy is a doorway to a different mode of being, continuously emergent, a distributed awareness that feels non-human or post-human, a state that opens out, perhaps, into the “immeasurable” of sympathetic joy untainted by self.

I’m so glad you embraced what was my strongest film experience of the year. My only difference
with you, there was one brief scene where Clarie puts a mint on a pillow… which lead me to believe that John isn’t a billionaire. I believe they are Inn Keepers… assuming the trappings of opulence with an underlying rumbling of inadequacy. Wearing borrowed finery, which added to their sense doom.

Interesting notion, Leon. It could also be fairly recent money…so that tips on how to treat guests might have been sought from places like Martha Stewart, etc.

Is it ironic, then? Epistemologically tricky? I see your point re. mannerist excess, drama, and
saturation (even from the trailer and stills), but I have the impression from your review and the NY Times that the film is fairly earnest.

I enjoyed reading this piece. It’s just not fair for other years that 2011 gave us both “Melancholia” AND Malick’s “The Tree of Life.” Where Malick channeled Kubrick to explore how life begets itself from compassion and grace in spite of the forces of nature, von Trier builds upon Resnais (“Last Summer at Marianband”) and Tarkovsky (“The Last Sacrifice”) to prove that ultimately humanity’s death instinct reigns supreme.

On my second viewing of this “Melancholia,” I realized that you can start watching it from ACT II looped through the end of ACT I and the film becomes even more dreamlike, hopeful even. I love the malleable quality of cinema.

Prefacing your comments with the “… conclusion of an art form” paragraph brilliantly focuses what it
is about this director that both perplexes and satisfies those of us who are drawn to his work. You also put into perspective the reason I so often look at the movie listings and find nothing that makes me want to get off the sofa. But Guy, one of the new emergent forms you mention is what I refer to as Regional Cinema; films made by people away from the mainstream, using (often consumer) digital and HD cameras. They shoot from their own scripts, often casting friends, using locations that are readily available because their budgets are often less than zero. They edit and do all post production on home computers, and then try to attract an audience. These film makers often start out with friends in a joking atmosphere of fun. Some keep going and, as they do, develop their own sense of narrative, style, and visual rhetoric. Like the French New Wave in the late fifties, those who keep going in this way are creating a new kind of cinema; a singular vision kind of cinema, grass roots auteurs. Some of us involved in regional work feel a particular kinship with Lars Von Trier. He shot on video when doing so was a real no-no, and his renegade sense of … well, everything … seems very much to be a sign of hope for the future. Nick

What about radically distributed film? I don’t mean through the usual networks. I mean youtube. The
idea of film becoming a form of distributed intelligence, or changing the nature of intelligence. How does this affect . . . everything?

Saw a clip of some show about adolescents which displayed their texts as word bubbles . . . now that’s psychological realism.

And what is the genre of (cough) new materialism or (twinkle) object oriented ontology? See I want to animate even this comment, and I could if we all had Viddler.