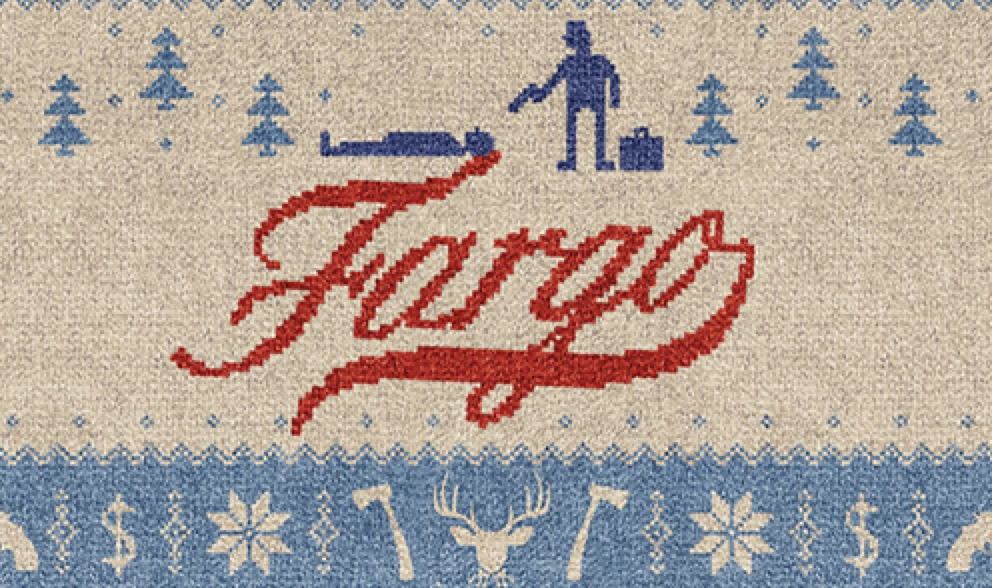 New Pathways in the Brain —

Plum tuckered-out after completing a writing project based on money and tragic drama, I sunk back last month into a week of binge-watching Fargo and found there, after nearly twenty hours of viewing…money. I’m talking about the scene in the last episode of Season 2 (Palindrome, by Noah Hawley) in which Mike Milligan, the enforcer of the Kansas City mob (played by an excellent Bokeem Woodbine), is rewarded for his aptitude for murder and mayhem by his boss (Adam Arkin) with, essentially, an office cubicle. No more gun battles in motel parking lots. No more bloodletting with the edge of a knife after errant sexcapades with nubile gangster babes. “There’s only one business left in the world” says Arkin’s character, “the money business.”

As a whole, Season 2 of Fargo tabled an extended narrative account of the hollowing-out of white America in the post-Vietnam War era by the same forces it had unleashed on the world. The final scene in the office tower pointed toward the main instrument of this collapse—money, finance, capital—reminding me again that we lack an adequate understanding of what happens when the human mind encounters the coin. And yet Fargo also suggests certain insights about this encounter are beginning to percolate out into the culture at large.

While we tend to assume that wealth and well-being are more or less synonymous, a flood of new research suggests things are not, in fact, so simple. In the fields of psychology and social behavior, and in the neurochemistry of personality, recent studies underscore that money not only makes us less compassionate, meaner, more selfish and predisposed to lying and cheating, but also why this might be the case. The results of these psychological studies are intriguing: affluent individuals exhibit measurably less compassion for human suffering than those less well off, are less able to recognize the emotions of others, and are more likely to cheat and act unethically. The compassion people feel towards other, finally, tends to decline as they become wealthier (http://www.scientificamerican.com/article/how-wealth-reduces-compassion/). In a recent New York Magazine article, researcher Michael Krause states that the data even suggests that “just the idea of holding money can make people selfish.” Results of this kind point toward a new alignment of money and self-interest—when it comes to wealth we might be better off simply saying no. (http://nymag.com/news/features/money-brain-2012-7/index2.html)

Before long I expect this startling research in social psychology to connect more directly with new studies in the neurology of personality establishing dopamine production as the source of this crucially important class of phenomenon. Often referred to as the “sex-drugs-and-rock-and-roll” neurotransmitter, dopamine is a chemical we crave. Manufactured in the brain out of common amino acids, dopamine drops into various neural receptors, lighting us up, making us feel energized and alive. The brain has evolved to generate dopamine when in the presence of the kinds of things our species has needed for its adaptive engagement with the natural and social worlds. But the production of dopamine in the brain depends on the promise of certain rewards, not on their actuality. Notice the specific language here—dopamine is generated not by enjoyment itself, but by the possibility of enjoyment. Once the desired appetitive reward—sex, social status, social affiliation, food—has been secured, the chemical stops surging. While the adaptive value of this set up is obvious—striving rather than satiation is what must be sustained—this aspect of dopamine production guarantees also a pervasive feeling of lack and non-fulfillment. Whatever you have obtained, it don’t quite scratch that itch; however much you have amassed, it is never enough. Those familiar with dharma practice will recognize a close correlate here of the dhukka or suffering Buddhists locate in neurotic striving.

This perspective on the link between dopamine release and lack helps clarify the trouble money caused when it first arrived in the form of metal coinage around 600 BC. As an empty signifier of future value, the coin materializes the futurity or future-promise of dopamine release. Held in the palm of the hand, stored in a big chest beneath the bed or buried in the yard—even signified in numeric form in the ledger of a bank—money delivers a steady drip of excitation that is only interrupted when the money gets spent. Money in the bank, accruing interest, both amplifies the reservoir of lack and also makes it tolerable, providing always a little more of the feel good neurotransmitter, like a psycho-social version of a morphine drip administered intravenously to a terminal patient. Money, finance, the money economy, is, from this point of view, simply an emergentexpression of the bio-chemical reward system governing the behavior of high end mammals—the coin materializes the spectral, future-oriented, lack-based nature of the evolutionary dopamine trigger system. To complete this circle, recent anthropology (David Graeber, for example) suggests that Buddhism, along with the other Axial Age religions—e.g. Confucianism, Taoism and Christianity—first arose in response to the emergence of metal coinage, and the psychological, social and political distortions this powerful social object brought with it along for the ride.

Have you ever thought about dharma or mindfulness practice as the back door man of dopamine delivery? Probably not, and neither had I until on Facebook recently I stumbled across this new research about differences between the neurology of extroverts and introverts. To track dopamine flows researchers inject an isotope into your brain and watch where it goes, and this is how they located a second major pathway in the brain—a pathway geared not to the social status reward system, but the reward value of information. The classic extrovert exhibits high sensitivity to potential rewards in the environment that have their origins in our adaptive history: social attention, social status, money, sexual opportunities. These “appetitive” rewards are human versions of those motivating adaptive behavior in primates and the other mammals too—all the way down the phylogenetic line toward the slime molds. In terms of neurochemistry, the trader on Wall Street experiencing the ecstatic rush of a sudden increase in the value of his stocks shares a lot with the hyenas and the barracudas smelling blood. Unique to humans, however, is a second dopamine pathway that lights up at the presence in the environment of information and insight, or what in various meditative traditions is referred to as awareness. Dr. Barry Kaufman, a researcher at Penn’s Imagination Institute, depicts this opposition in stark terms: “We can get excited by the reward value of things in our ancestral past—money and power and social status and all those things extroverts tend to score higher on, things that introverts tend to not care so much about…but we can also differ in how excited we get by the potential reward value of understanding, of curiosity, of information.” The pleasure of samadhi, and of the absorptive meditation states called the jhannas and of rigpa all relate in different ways, perhaps, to this second network.

Who knows how this research will hold up and evolve, but notice again how it re-frames our current cultural and political landscape. The newer, more highly-evolved dopamine network simply does not light up at the idea of an orgy of power and status. It is not that introverts (there are also “ambi-verts” who play both sides) can’t compete, they’re just not interested in the spectral rewards of the ancestral network, complete with its desultory lack-based hangovers. Among other things, this disinterest upends the standard thrust of social Darwinism—it is the new insight pathway, rather than the old social dominance pathway, that sets the species apart from the rest of the animal kingdom. As someone fond of hyenas and sharks, and also highly suspicious of our susceptibility to species-centric pride, I have to ask: do the results of this research point toward a new form of humanism? Perhaps, but the real focus here is on mechanics over essence—the specific and highly plastic and changeable material processes shaping and modulating our behavior. And so, if we were to surrender to a new humanism valorizing the insight network as the distinguishing characteristic of our species, perhaps this humanism would include a new clarity about our embeddedness with other living systems. Quietly, perhaps, the species might be developing a capacity for non-reactive plasticity and presence, or what we might also call non-separation from experience. From this point-of-view, awareness practices like those of dharma might be construed as a way to take control of our own dopamine reward system, seizing ownership, as it were, of the “means of production.” By depicting a world in the grip of ancestral violence Fargo suggests we are strongly incentivized to welcome this kind of re-appraisal. 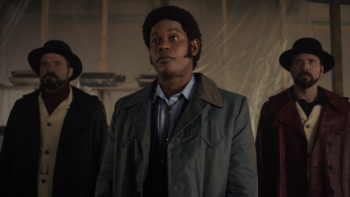 By depicting with accuracy the violence running beneath the homespun embroidery of American history, Fargo provides a sense of the stakes of this historical moment. Based on the 1996 film by the Coen Brothers, the series derives its edge and its dark vision of America from the work of the novelist and screenwriter Cormac McCarthy. The Coen Brothers embraced this vision in its pure form in perhaps their finest film, No Country for Old Men, based on the McCarthy novel of the same name. That film ends with the sheriff Tom Bell (played by Tommy Lee Jones) lamenting the flood of apocalyptic violence rising up along the money trail of the drug trade from Mexico, an economy fueled by the addictive transactions of dopamine release. “The crime you see now,” Bell says, “it’s hard to even take its measure.” In Fargo, Bell’s monologue is echoed directly at the close of Season One in a scene where the chief of police of Bemidji, Minnesota (Oswalt, played by Bob Odenkirk) steps down from the position because the level of violence he has encountered simply terrifies him.

What McCarthy depicts is the purely mechanical forces driving this inexorable, self-amplifying plague of murderous violence. Reigning over the worlds he creates in his novels are dark angels—Judge Holden in his masterpiece Blood Meridian, the hitman Anton Chigurh of No Country For Old Men and the predatory Malkina of The Counselor—all of whom exhibit an uncanny intimacy with money and the coin. The message—a warning, really—concealed within McCarthy’s depictions of these violent angels has to do with the entirely mechanical operation of the relational forces they represent. Dependent on external rewards, the lack-based ancestral network emerges as a meshwork of symbolic systems governed by a merciless, machinic will to negation and death seeking to obviate all insight or undertanding. All of us, finally, are called to chose which of these modes of relating to the world we put first.