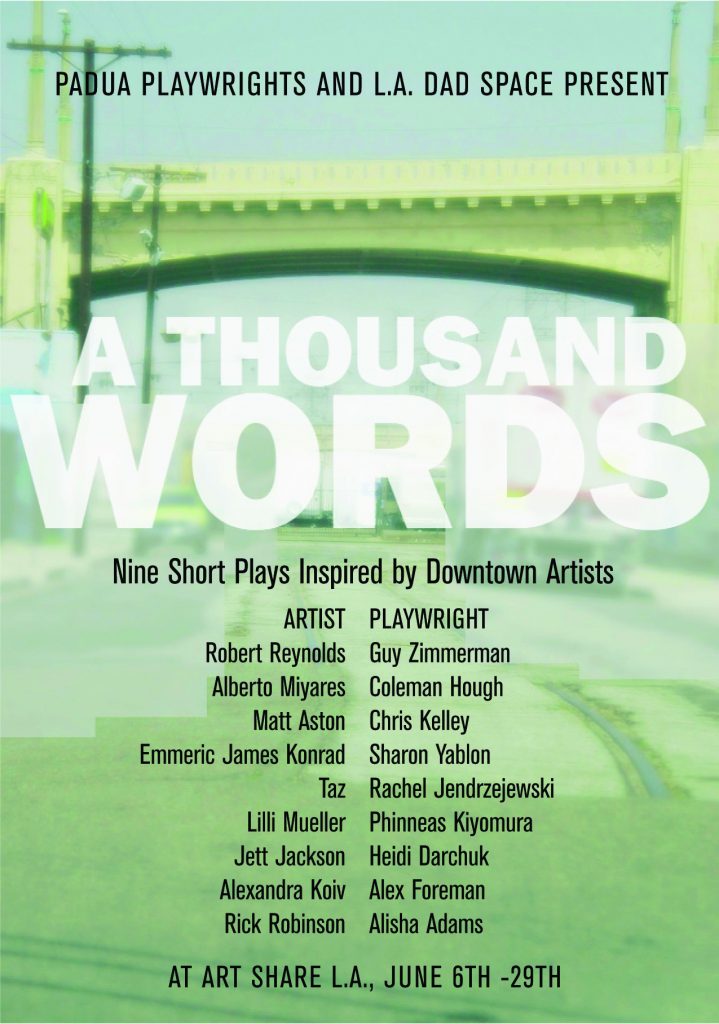 ‘A Thousand Words’ writers hope it’s the start of something big
June 11, 2008

Throughout theater history, writers have mined the works and biographies of artists to create such vastly different dramas as “Sunday in the Park With George,” “Six Degrees of Separation” and “Occupant.”

Taking the formula in an experimental direction, Padua Playwrights’ “A Thousand Words” pairs nine dramatists with nine visual artists, most of whom come from the Los Angeles avant-garde scene. Each playwright was commissioned to produce a 10-minute drama using a work from the artist’s studio or an aspect of the artist’s life. (A gallery show featuring the artists’ works will accompany the play.)

“A Thousand Words,” which opens Friday, cross-pollinates two art forms with the hope of isolating the gene of creative inspiration. “It’s a big experiment, and no experiment is ever a failure,” says Coleman Hough, whose “Dressed for Dinner” is in the production.

Hough is best known for her screenplays for Steven Soderbergh’s “Full Frontal” and “Bubble.” Anyone who has seen those strange films will be prepared for the writer’s tendency to mingle mundane chitchat and far-out metaphysics. In Hough’s play, a man and a woman meet for dinner in a restaurant. Their conversation is interrupted by a singing waitress, who emerges from a hole in the table and informs the couple of a subterranean world.

The play is loosely based on a dinner meeting with artist Alberto Miyares at Pacific Dining Car in L.A. The playwright recalls the constant intrusion of ambient noises. She decided to make those interruptions a focal point of the story.

“I never know what I’m writing until I actually do it,” says Hough, who portrays herself in the play. “The creative process is like making paper — the pulp is floating around the water and you just grab it. It’s scoopable. You don’t throw anything away.”

Miyares, a Lincoln Heights-based sculptor, won’t play himself in the production, but he built the set and is contributing new work to the gallery show.

The artist views his creative process as a mystery best left unexamined by the creator. “If I had to write a paragraph explaining what one particular piece is about, it wouldn’t give the piece its voice,” he says. “A painting or sculpture should be able to speak for itself.”

If the rationale behind “A Thousand Words” sounds abstruse, the play’s producers hope it will yield something tangible in the long run.

That’s because “A Thousand Words” is a prototype project for a new arts center to be built in the Downtown Arts District, according to Tim Keating, president of L.A. DAD Space, which is co-producing the play along with Padua.

The arts center would be on the ground floor of One Santa Fe, a mixed-use building that is slated for construction this fall with a completion date in 2011. The center would house a 99-seat theater, an art gallery, a multimedia lab and studio space where artists of all disciplines could interact.

“It would be a petri dish of creativity,” Keating says. “It would be a meeting space where artists of all stripes could congregate and influence each other’s development.”

L.A. DAD needs to raise $250,000 to construct the interior of the ground floor. So far they have raised about 30% of that goal. The building owner has offered to rent the space for $1 per month, a gesture of goodwill to the downtown arts community. In recent months, artists have complained that One Santa Fe would accelerate gentrification in the neighborhood, leading to higher rents. Opponents have created a website, www.onesantafe.org, in which they describe the building as “a massive wall, severing the Arts District from the adjacent communities in East LA.”

Despite these grievances, the City Council has approved construction of One Santa Fe. The completed building will occupy former rail yards bounded by Santa Fe Avenue and the Los Angeles River.

The arts center would serve as a home for Padua Playwrights, one of L.A.’s most enduring experimental theater organizations. Since it was founded in 1978 by Murray Mednick, who still serves on the company’s board and continues to write plays for the company, Padua has championed the early work of theater artists such as Sam Shepard, Jon Robin Baitz, John Steppling and David Henry Hwang.

“L.A. is a great place to create art, but not necessarily to show it,” says Padua Artistic Director Guy Zimmerman. “It all comes down to traffic. Every time someone invites me to a play, I have to think twice. I don’t think L.A. has a self-image of being a hotbed of creative activity. But it is and has been for a long time.”

He adds: “What we’re trying to do downtown, in the Arts District, is to sustain this undervalued environment that has nurtured artists for so many years.”

Padua is using “A Thousand Words” to seed another project: an online community that will combine visual, performing and digital arts. The site, run by L.A. DAD Space, is scheduled to launch in July and will initially offer Web adaptations of five plays from “A Thousand Words.”

Writers will distill their scripts to five-minute screenplays, shot in digital video, then streamed from the site. Padua also wants artists to shoot B-roll footage that Web users could combine and shuffle to create their own art.

“As a playwright, I write for the stage,” says Christopher Kelley, whose “Piece” is part of “A Thousand Words.” “The mind-set of a playwright is that you have to think about the stage: When do actors enter? When do they exit?

“Maybe I have a Puritan attitude,” he adds. “But I’m not thrilled by the tendency to put everything on the Web.”

“I like the idea of mixing media,” says Phinneas Kiyomura. “We’re already mixing theater and art, so it makes sense to move into the digital world.”

His play “Woods” is about a reclusive artist living in a rural town. A mysterious woman visits him, claiming to be someone he had long forgotten. They argue, and the artist reveals the sculpture he’s working on.

The play was inspired by a visit to artist Lilli Mueller’s studio in downtown L.A. Her sculpture “Transformation” depicts a wooden nest made of tree branches concealing a human body. The rough texture of the sculpture gave Kiyomura the idea of setting his play in backwoods country.

For Kiyomura, creativity is a sometimes lonely and often neurotic process of trial and error. “I think the artistic process oftentimes means making a stab in the dark. So often you come in with an idea of how you’re going to write something, and when you’re done you realize that your whole thesis was wrong. And so you have to cut away your bad idea in the beginning and just go with what’s there.

“We were given a lot of freedom and were told we could relate to the artwork in a loose way. So I had a deadline and no preconceived notion of how to do things. It’s ironic, but I think having more freedom can be more stultifying for an artist.”