Written and Directed by Guy Zimmerman

A noir mystery set in a rundown appliance repair shop in South Central Los Angeles. Charged with conflict and dark humor, Vagrant is a play about memory, emotional violence, and redemption.

Playwright/Director Statement:
I’ve been reading D’Aulaires Book of Greek Myths to my daughter. The material is full of wonders, providing Eliza (age 5) with a wealth of questions her poppa is unable to answer. The myths are full of powerful heroes and villians, all of whom must bow in the end to implacable and volatile forces beyond their control. The crimes these figures commit, either out of inate evil or in moments of blindness, propagate out into the world at large, demanding redress. Vagrant is a play about such crimes; about memory and redemption. Vulnerable, and yet also full of violence, the characters in this noir-vaudeville struggle fiercely to escape dark influences that reach up out of the distant past. Their personalities fracture under the strain, leaving them bewildered and helpless. In their confusion they draw close, correctly recognizing in each other a kind of liberation.

The Twilight Zone meets the theater of the absurd in playwright-director Guy Zimmerman’s compelling and confounding tale of sin and redemption. Meyer (Christopher Allport) is the middle-aged owner of a rundown electronics shop in South-Central L.A. “I like to pamper my patrons,” Meyer says proudly to Larkin (Patrick Burleigh), a young LAPD beat officer. Yet Meyer displays a malevolent streak as the cop delves into the man’s business, or lack thereof. As with many a noir mystery, however, everybody’s got a secret. Is Larkin there to report on a homeless panhandler arrested for pestering Meyer and his younger wife, Patty (Niamh McCormally), or to return Patty’s child, who has been missing these last five years? Is Patty working as a seamstress or a hooker in the back of Meyer’s disheveled store? Is Meyer Patty’s husband, her father or some other relation that connects all three characters? And just who is the titular vagrant of the play? In Zimmerman’s stylized and dreamlike narrative, each party inhabits several personas — parent, sibling, lover, enemy — and the plot line bobs and weaves like Muhammad Ali, landing powerful emotional punches along the way. Kathi O’Donohue’s atmospheric lighting, Don Preston’s moody music and sound, and the impassioned ensemble complement this mystifying story.

One reason dreams can disorient, as well as fascinate, is that facts get distorted and blend with fiction. That’s why the stories that play in our sleeping minds are frequently hard to retell to another person once we are awake.

With his latest play, “Vagrant,” appearing at the Electric Lodge in Venice, Guy Zimmerman has fashioned a dreamlike state where reality fluctuates and time ceases to be linear.

Hardly your mainstream evening of theater, it is typical of what to expect with Zimmerman, or any Padua Playwrights production. The company, for which Zimmerman has served as artistic director since 2001, has the well-earned honor of being the area’s leader in complex works that dive fearlessly into the text, striving more for an expression of ideas and emotion than presenting a cohesive and easily digestible story.

That description might make some theatergoers wary, but they shouldn’t be. “Vagrant” is funny, and it’s a successful homage to the film noir genre. It’s well-acted and tightly directed by Zimmerman. And its running time of 80 minutes with an intermission keeps the script’s intentional repetition from becoming tiresome.

“Vagrant” is set in an appliance sales and repair shop in Los Angeles, run by an angry man named Meyer (Christopher Allport, who has a recurring role in ABC’s “Commander in Chief”). Larkin (Patrick Burleigh), a policeman, is questioning Meyer about a vagrant whom other officers removed from outside the shop because Meyer complained that he was causing problems.

Larkin also speaks to Meyer’s wife, Patty (Niamh McCormally), who appears to live in a back storage room, and who has been distraught since the disappearance of the couple’s daughter years earlier.

The dialogue is sparse and darkly humorous. For example, Meyer describes Patty by saying, “Once she worms your way into your heart, you need an ax to hack her out.”

The structure of “Vagrant” resembles most David Lynch movies, where halfway through, everything is turned on its side. It becomes unclear who Meyer is, and what relationship he has to Patty and Larkin. You become unsure of who — if anyone — is real.

The script wrestles with the idea of memory, the way humans relive moments — often tragic mistakes — until those moments take on lives of their own. As director, Zimmerman has kept the action spare and the pace swift, befitting the noir genre.

The performances border on melodrama. As Meyer, Allport appears on the verge of exploding. He shouts or growls most of his lines and his expressions fluctuate between scowls and bewilderment.

Burleigh uses piercing stares and a confident tone to make Larkin seem, at first, like the stereotypical cop. Gradually, his assuredness turns to confusion, which adds to the mystery surrounding his character.

McCormally is eerie as the somber Patty. Her blank eyes and lyrical voice register as a woman who has lost her mind.

A major contributor to the success of “Vagrant” is sound designer Don Preston. Foreboding music swells at the most tense moments, heightening the sense of danger.

Those who see “Vagrant” are likely to have a unique take regarding the play’s statement on humanity. And fodder for engaging post-performance debates is a sign that Zimmerman has done his job well.

It’s refreshing to see some Los Angeles theatre that has you leave debating what you just witnessed and experienced. Vagrant is not candy on a stick, rather a full-bodied glass of wine. Eerily scored (Twilight Zone meets Sin City), the anachronistic noir of South Los Angeles brings Larkin (Patrick Burleigh), an LAPD officer, into a dilapidated digital repair shop sketchy of its own existence. The shop’s front man, Meyer (Christopher Allport), is a man living the past as NYC bridge-and-tunnel kid who attempts to mask his erred family life with Patty (Niamh McCormally), Meyer’s wife, a creature void of emotion one moment, grounded to life the next.

The trio performs Guy Zimmerman’s work, a sonata form tragedy with a sweet and sour recapitulation giving no pleasing-to-the-mind cadence. Meditating on that last atonal chord is the audience’s only liberation of the past hour and a half (and hopefully more than that).

Writer and director, Guy Zimmerman (also artistic director of the Padua Playwrights) came to Los Angeles in the early 1990s and found himself curiously involved in tragedy after tragedy:

It’s difficult to imagine anything less LA than the tragic mind-set. Even more than most Americans, we Angelinos see nothing wrong with the aspiration to feel happy all the time. We surely rank among the most fervent adherents of the American credo that happiness is a thing and you can have it.

For the characters of the play, the Vagrant who used stand outside the digital repair shop (Meyer pronounces it digical, maybe dilogical) is part of what got in the way of happiness. Now gone, he still can’t’ find it and talks of his lost daughter – Pauline. Memories collide and repeat themselves in different forms in Vagrant, but a truth comes out of this tragedy:

We respond [to the effects of tragedy] because something within us enjoys not being lied to. And this enjoyment may taste even sweeter when we live in LA, crucible of self-protective deceptions.

Vagrant continues through March 4 at the solar powered performance space – The Electric Lodge in Venice. 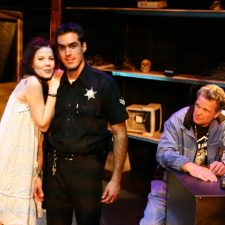 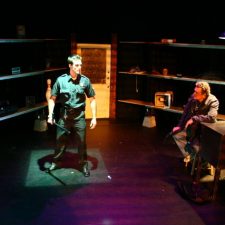 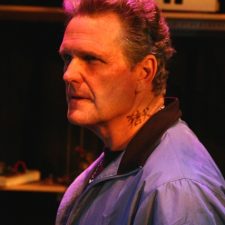 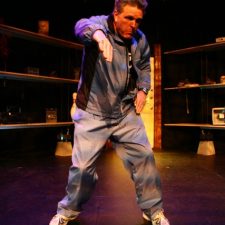 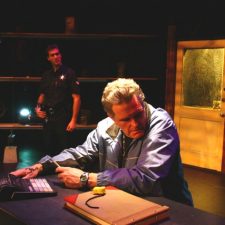