Toward Re-organization
Most of us spend our lives avoiding the Heart Sutra, but it pursues us anyway like a heat-seeking missile, even while also rising up around us like the petals of the famous lotus flower. Allow me to explain.

We tend to assume that, at least in principle, there is nothing we may not know. The idea that being born, say, in the second half of the twentieth century in the US of A might limit or shape what we may know seems odd to us, insulting almost. And yet periods of history are defined by styles of thinking, root ideas and thought-formations that allow some ideas, but not others, to be thought. Such periods in history are called epistemesby the French philosopher Michel Foucault, who points, for example, that a capacity to locate the common roots of French, Spanish and Italian languages in Latin requires an idea no intelligent person could entertain in the Classical episteme of the 1750s, even a person as intelligent as, say, Voltaire. The idea that a language might shift and develop—evolve, we would say—only arrives in the 1800s with Darwin and what Foucault called the Historical episteme. All of this, of course, begs the question: as citizens of the West in the second decade of the twenty-first century, what is it today we cannot think? “Tell me what that is, Foucault,” I want to say, “then watch me go right there and think it.” Well, why not, in fact, get started right away, now, together, feeling our way toward it—the un-thought.

Launching a journey of this kind involves locating where we are now—mapping our current episteme, to use Foucault’s term. Foucault himself, of course, had a lot to say about this before he passed away in 1984 (R.I.P., Michel!), but I think it is even clearer today that the era commencing after World War II can best be defined as the episteme of systems thinking. Solar systems, eco-systems, political systems, networked connections and relationality, emergent form and complexity—the systems concept shapes the landscape of our knowing, organizing how we perceive and experience the world. Surfing the internet, shopping online, selling our labor and our time–we seem to live embedded in systems at every level. And it doesn’t stop there because as embodied beings we ourselves are composed of metabolic and nervous and endocrine and immune systems gathered together in the grand assemblage of our human mind-body. In terms of how we enactmeaning in our lives, don’t you think of yourself as an entity in the process of evolving even while you retain your basic identity? Don’t you anticipate continually adjusting and fine tuning the relations you maintain with larger systemic forces—professional, personal, cultural—at every level of your experience? If you look, I suspect you will find many examples of systems thinking in how you perceive yourself and your life.

Like most interesting concepts the idea of “systems” has a history. Many would trace the debut of the systems concept to the Copernican revolution, in which European man dislodged himself from the center of things, and the order of the heavens was revealed to reside in systemic relationships. In philosophy, the work of Immanuel Kant introduced the idea of matter organizing itself in systemic ways to produce life (God was still in the picture, but still), and then, shortly afterwards, Adam Smith, Karl Marx and many others brought systems thinking into the analysis of political economy and the social. Throughout these same decades the classical symmetries of Newtonian physics were being continuously perturbed by the low science of thermodynamics and its governing idea of statistical mechanics. Combined in the early twentieth century with new insights into circular causality and regulatory systems, this line of inquiry eventually culminated, in the 1940s with the birth of cybernetics. It is here that systems thinking arguably becomes a candidate for the kind of deep formational influence Foucault had in mind with his concept of epistemes. The history of cybernetics—first wave and second wave cybernetics—arguably delivers in the 1990s a new interpretation of consciousness called enactivism. First articulated by the Chilean philosophers Humberto Maturana and Francisco Varela (both were also, first and foremost, biologists) enactivism views consciousness not as the product of the mind encased within the skull, but as enacted, extended, embedded and embodied (the “4-e’s”). While Varela died prematurely in 2001, enactivist thinking has been carried forward by his colleagues Evan Thompson, Eleanor Rosch and Alva Noë and by many others.

This kind of genealogy is tricky, of course, because to say that a concept like the systems concept has a history is not to suggest such a history is the story of refinement, improvement, advance toward an ideal, or anything of that kind. We no longer think of history as a linear story toward an inevitable unity or destination, and the distant past is full of surprising relevance. It is far from coincidental, for example, that Varela, Thompson, Noë and no doubt countless other enactivist thinkers, are also practicing Buddhists. From its beginning 2500 years ago, Buddhist thinking, has, in fact, always been characterized by versions of the systems idea (as were even older contemplative traditions in India, such as Vedanta.) Figures of thought such as co-dependent arising, the Wheel of Samsara, the Five Skandas and the nama-rupa factors are strongly aligned with systems thinking. This alignment becomes even stronger moving into the Mahayana schools of dharma (Zen and Vajrayana), with their emphasis on the concept of sunyataor “emptiness” as a counterpart to “form,” as laid out most forcefully in the Heart Sutra that is on its way toward you. As I’ve pointed out in these essays before, emptiness here doesn’t refer to void or lack but rather to the absence of essential form—every discrete object or entity, when examined closely, shows itself to be also the product of a multitude of distinct factors acting in concert. Thich Nhat Hanh, the Vietnamese Buddhist teacher, would illustrate this co-dependence by pointing out how a sheet of paper contains a cloud because without rain the trees out of which the paper is composed would never have grown. 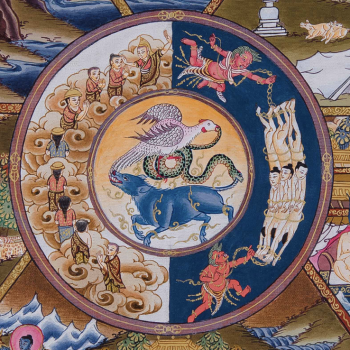 The basic form-emptiness dyad of Mahayana Buddhism can be seen as a root definition of the very term system. What, after all, is a system if not a relational processthat is also a discrete thing? This double identity is one of those tricky concepts to rest your mind on. A system is a discrete thing…but it is also a relational emergenceretaining its form while the material dynamics providing for its actualization remain in force. As The Heart Sutra puts it, “form is emptiness, emptiness is form”—these can usefully be applied to the bifurcated nature of a system. The way systems relate to the environments that sustain their adaptive life only deepens these resonances between systems thinking and the subtle self/non-self paradoxes of dharma. Looking back at this millennial alignment I am struck by the role systems thinking may have played in opening a door through which dharma could re-enter Western thought, weakening the strict prohibition against paradoxathat has reigned supreme since Aristotle first articulated the Law of Noncontradiction. The logic of both/and, you could say, disturbs the dominion of either/or. The enactivist picture of consciousness, for example, depends on this kind of subtle contradiction, in which we are both separate (embodied/enactive) and connected (embedded/extended) at the same time. This double meaning infuses the ground of being with a certain intrinsic irony, and systems theory brings this irony to the fore in how distinctions between object, system and environment are never clear and distinct. Life itself can once again be viewed as a form of cosmic irony, a trick and a contradiction.

It is possible in the West today to view Buddhism as, not a religion so much as a re-organizational practice—a definition central to contemporary aesthetic theory—an art. The work of contemporary Buddhist writers such as David LoyandSteven Batchelortends to support this point of view. Likewise, contemporary philosophers such as Thompson and Noë straddle the line between Eastern and Western definitions of what it means to be a philosopher. The focus on reorganizational practice, or what the Greeks would call techne,allows us to notice an interesting meta-symmetry. The technological idea or schema of the engineer lies across the boundary between our inner life and the other world, and points outward. The koan, the mantra, the visualization or prayer lie across this same boundary, and point inwards. Viewed as inner technologies, these practices support a new kind of engineering, one devoted to granting us some degree of control over our systemic relations with each other, and with the other living systems supporting our continued survival. One of the things I find intriguing about this idea is how it draws upon the driest and most analytical mode of Western thought—the thinking of the engineer—to look in a new way at what it might mean to assert a greater degree of control over the forces shaping our future. Engineering, after all, is the arena in which the West has most excelled.

In dark times it is comforting to remember what it feels like when insight arrives. We have the sense then of something returning—a truth once known but forgotten for years—and the insight now raises us up so we can see even higher, across the tops of the trees, so to speak. It is comforting also to notice how minor the triggering shift might be, how slight that little turn in the mind that unlocks a cascade of escalating recalibrations, all the switches flipping like dominos so that what had seemed terminally locked up and dying suddenly opens out into broad new valleys green with new clarity.

Nathan Birnbaum says:  June 13, 2017 at 9:55 am  The Noë video cited above becomes especially brilliant re reorganizational practice … which to me is the most interesting definition of art and philosophy since Walter Benjamin, at least …. at 47:02 when he brings in writing as a second order reorganization of speech and then broadens to the fact that art changes the way we see, hear, dance, etc. “Art reorganizes us.” Which points to the “emancipatory value of art.” Not has a really brilliant phrase, that art says, in effect, “See me if you can!” Very useful tool there……. However, like Brecht’s, and the Frankfurt School’s, attempts at a totalizing polemic for art, the political remains problematic. I think we have to find the inherent connections with self rule. the ultimate metaphor for anti-capitalism and anti-authoritarianism …. that is, democracy.