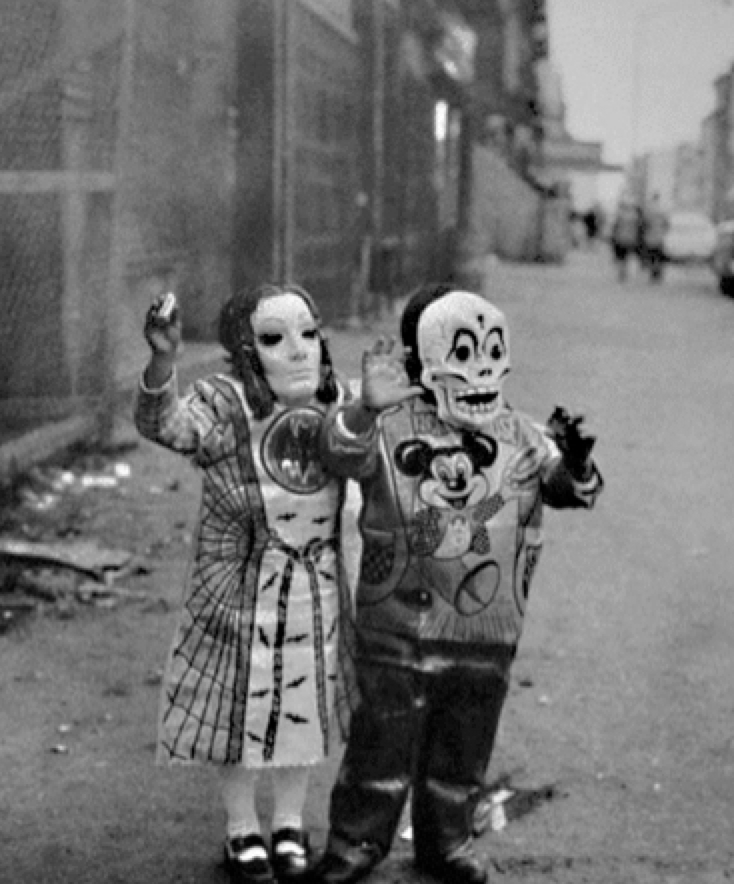 Listening to Obama speak about the verdict in the Trayvon Martin case I found myself thinking back to Halloween, a few days before the last election, when I drove to Pasadena to pick up my daughter, age 12, from a small class party. The airwaves that night were saturated with electoral news and commentary, the Democrats fighting back the Romney campaign’s increasingly desperate attempts to create the silk purse of “momentum” out of the sow’s ear of declining swing state poll numbers. While Obama has governed too far to the right for my taste (to put it mildly), and while the ways he has continued, and even enhanced, many of the most depraved and indefensible policies of the Bush-Cheney years (drone warfare, to cite just one example) are deeply troubling, the choice between the two candidates remained a stark one for me. Driving to Pasadena I struggled with a species of dread I first experienced as a child driving across the States on one of our epic road trips on the night Hubert Humphrey lost to Richard Nixon in 1968 and my parents fell silent, unable to make sense of the choice the voting public had just made. Then, as now, the inexplicable element was linked to race, and to the complex role anti-black racism plays in American cultural life, a role that, it seems clear, continues to carry with it several mysteries and surprises for all of us.

Along the streets of Pasadena children in costumes drifted in small groups through the twilight, followed by the taller silhouettes of their parents. Channeling monsters and heroines, they visited the houses for candy dished out by residents wearing ghoulish masks. Stepping into the house where my daughter and her friends were resting from their own trek through the neighborhood – a trek that was, after all, a little behind them now – I found the girls assembled around a large screen monitor playing a new video dance game (Dance Central). Accompanied by a pulsing baseline, the game involved imitating the dance moves of a hooded rapper with points scored for how closely the player comes to embodying the rapper’s style. Observing this remarkable cultural spectacle (“New moves, new music, nonstop fun for everyone!”) it was impossible not to think back on the remarkable history of white Americans imitating black physicality in performance: the minstrel show. On a synaptic level, these girls were using a machinic assemblage to tap a source of cultural vitality that has played a central role in the evolution of American culture since the nation’s beginning, at the cost of inestimable suffering on the part of black Americans. And the vehicle of this vitality was the same avatar, the same cultural icon in hooded human form, that, a few months later, would trigger the heroic fantasies of pathetic George Zimmerman, and spell the death of Trayvon Martin.

Watching the girls rehearse their ghetto moves, I found myself imagining how loaded the scene would be to a father in any of the “Red States,” regions in which anti-black racism has been so assiduously cultivated by American plutocrats in need of support for their long project of subverting democratic traditions, restoring a vertically stratified social hierarchy, and pilfering the wealth of the middle class. I thought also of the work of several black scholars I’ve been exposed to recently – Orlando Patterson, Saidiya Hartman, Nadine George-Graves, bell hooks, Frank Wilderson and David S. Marriott among them – and was struck again by the surreal dislocations American blacks confront daily in their ongoing engagement with a surrounding culture that remains entirely blind to their humanity. These scholars have long been eloquent on the many ways in which the African slave trade underwrote the birth of the modern, the emergence of capitalism and the rise of the industrial era. There’s no way to eradicate anti-black racism, they would likely agree, without undoing the entire edifice, the juggernaut of Western culture, along with its modes of thought and its habits of violence and social domination.

In his 1998 book Rituals of Blood, Patterson examines the astonishing violence perpetrated by Southern whites on “free” black men in the period that begins after the Civil War, and continues forward through the 1950s into the Civil Rights era. James Baldwin, Marriott, Hartman and many others have written eloquently about these atrocities. Many of us have seen the grotesque and unforgettable postcards in which aw-shucks Mayberry RFD white crowds pose with broad grins around the “strange fruit” of the hanging, tormented black body. It is macabre and surreal in the extreme to look up from a passage about, say, the cannibalism often practiced at such black lynchings, and listen to some conservative demagogue or pundit pandering to a significant bloc of the electorate via some coded invocation of Confederate glory. Signing the Civil Rights Act of 1965, Lyndon Johnson recognized he was turning the South over to the Republican party for at least a generation. The Republican leadership – Northeastern industrialists for the most part – were quick to notice how easily racist messaging could be masked inside “dog whistle” rhetoric about “inner city crime,” “welfare” and “big government.” It was only a matter of time – around 40 years, it turns out – before this shift remade the GOP into a party of Southern white racists unable to build a governing majority. And yet the 2012 election only underscored again how the issue of race remains as out-of-bounds for public discourse as it is constitutive of our cultural lives.

Today the complexities of the reaction to the verdict in the Trayvon Martin case, and particularly Obama’s measured remarks a week later, suggest that this wall of silence is beginning to show fissures. Remarkably, Obama’s speech echoed, however distantly, the basic outlines of Franz Fanon’s groundbreaking 1952 analysis of colonial and black subaltern subjectivity — Black Skin, White Masks. Fanon’s vivid description of the corrosive doubling by which the subaltern’s identity is imbricated with an eroticized, introjected imago of inadequacy and libidinal darkness, could be detected shimmering in the spaces between Obama’s words, and through the brief pauses he took as he described the sound of car doors locking as he crosses a street, or how a white women on the elevator might hold her breath as he steps aboard. On one of the progressive blogs I surf someone posted comments about the speech from a couple of rightwing sites. Reading through these rage-filled mumblings made me feel like Max Von Sydow’s priest in Friedkin’s film The Exorcistsitting at Linda Blair’s bedside. The persistent centrality of racism to our cultural life sounded clearly in the choked anger, the sense of bewildered panic, that defined many of these comments. Full of ominous invocations of race wars and massive violence, these sputtering voices expressed a fear that is visceral and primal, a fear dynamically linked to the physical, psychic and cultural dismemberment of those who have been lynched, enslaved and long oppressed. The sense of a unified, coherent world with a viable future these anxious, confused white Americans have constructed to comfort themselves relies on a hidden fund of black suffering that is required to remain silent, to pass unnoticed. Allow that suffering to articulate itself and it feels as if everything has begun to fall apart, leading to threat-response, to panic, bewilderment and finally, of course, to an impulse toward violent action. This is, in short, the very definition of a social psychosis, and America remains dangerously in its grip.

For how many centuries now have black Americans been utterly clear about the demonic pathology I’m describing? Obama’s forbearance, the forbearance of Martin’s parents and of blacks across the country, is the forbearance of the bomb squad technician defusing an explosive device he knows intimately. And yet racial injustice, it becomes clear, is one of several dangerous dysfunctions deeply rooted in the cultural assemblage of modern America. The dis-assemblage that has perhaps begun on the racial front might also deliver positive change in other recalcitrant social pathologies characterizing contemporary America, such as environmental degradation. Many black scholars will roll their eyes at the idea of black culture riding to the rescue of white America, but Patterson himself argues forcefully that black expressivity has always played a strongly Dionysian role in American culture, delivering vitality and resourceful innovation. Facing profound environmental and economic challenges, challenges defined by the need for resilience, responsiveness, and a speculative skepticism about our claims to psychic unity, we need to cultivate a willingness to improvise, and an immediate expressivity – Dance Centralon a large scale. In Nietzschean terms, this is to say, our sensibility needs quite a bit more Dionysus, the deity who is always other…and this brings me back to Halloween, and the group of suburban white preteens learning how to move. Patterson is eloquent about the social costs for the black community of playing always the Dionysian role in American cultural life – the pathologies of criminal violence and familial instability – and perhaps it’s helpful to view the current debate over Trayvon Martin’s demise as a slow transference of Dionysian chaos back toward its proper source…and keep the pressure on.

Franklin Zimmerman says:  August 20, 2013 at 10:44 am  Congratulations on another skillfully written blog. I agree wholeheartedly with your opinions and your view.